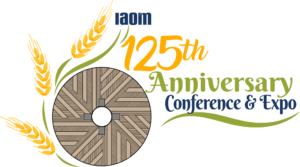 IAOM Aspiring Miller Award
This award recognizes exceptional under 30-year-old milling professionals who have already made important contributions to their companies.

Eligibility and Qualifications
Nominees must be active members of IAOM, who are identified by their companies and/or industry partners as having made significant contributions to their milling company’s operations. Nominees should be no more than 30 years old on the first day of the conference (August 30, 2021).

Announcement
The Aspiring Miller Award will be presented during the annual banquet and awards ceremony held during the IAOM Annual Global Conference.

*Nominations solicited for Milling Operative of the Year

Nominations are being accepted until April 8 for the 2021 “IAOM Milling Operative of the Year” award, which recognizes excellent performance by a miller.

Established in 1986 by Milling & Baking News, sister publication of World Grain, the award will be presented in April to the practicing milling operative who has made the most significant contribution to the progress of a plant, a company and the industry from an operating point of view.

The 32nd and 33rd annual “Milling Operative of the Year” awards will be presented on September 1 at the IAOM Banquet and Awards Ceremony of the 125th Anniversary International Association of Operative Millers Conference and Expo, August 29-September 2, in Little Rock, Arkansas. The winner will receive an inscribed plaque, and a scholarship will be established in the winner’s name at Kansas State University in Manhattan, Kansas, USA.

Vince Kintzle, Ardent Mills, Denver, Colorado, USA, was the recipient of the 2019 award.

Other recent winners include:

Nominations should be submitted by April 8, in a summary of not more than two pages to:

Because these cookies are strictly necessary to deliver the website, refuseing them will have impact how our site functions. You always can block or delete cookies by changing your browser settings and force blocking all cookies on this website. But this will always prompt you to accept/refuse cookies when revisiting our site.